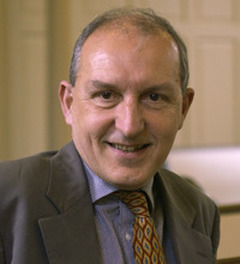 Gordon Graham is Henry Luce III Professor of Philosophy and the Arts at Princeton Theological Seminary in the USA. Born in Ireland and educated in Ireland, Scotland and England, he taught philosophy in Scotland at the University of St Andrews  from 1975-95, and at the University of Aberdeen from 1996-2006. He has published on a wide range of philosophical topics relating to art, education, ethics, politics, religion, and technology, and has a special interest in the Scottish philosophical tradition. In 1999 he was elected to a Fellowship of the Royal Society of Edinburgh, Scotland's premier academy of science and letters.

An Anglican priest ordained in the Scottish Episcopal Church, he currently holds a license in the Episcopal Diocese of New Jersey. In 1990 he was Sheffer Visiting Professor of Religion at The Colorado College, and in 2005 Stanton Lecturer in Philosophy and Religion at the University of Cambridge.

He was Director of the St Andrews University Music Centre from 1991-5, and has taught as an Adjunct Professor of Sacred Music at the Westminster Choir College of Rider University, New Jersey.

This website has information on his appointments, activities and publications in philosophy, religion and the church, music and the arts, as well as a link to publications and papers.