Religion and the Church

Gordon Graham is an Anglican priest ordained in the Scottish Episcopal Church. He served for twelve years in the Episcopal Diocese of New Jersey, USA. He was Associate Priest at Trinity Church Princeton (2006-9), St David's Cranbury (2009-13, All Saints' Princeton (2013-18), served on the Committee  for the Priesthood, and as an appointed member of the Chapter of Trinity Episcopal Cathedral, Trenton.  He is currently licensed in the Diocese of Edinburgh as an Assistant Priest at Christ Church Morningside, Edinburgh. He also serves as Chair of the Development Project Group for St Andrew's Cathedral, Aberdeen.

He is the author of LECTIONARY NOTES -- a weekly commentary on the Sunday readings in the Revised Common Lectionary. From 2009 to 2013 he was a columnist for the Episcopal Journal. His column 'Reconcilation must begin in our own House' won a 'Award of Merit' in the 'Editorial or Opinion Piece' category of the 2012 Associated Church Press Awards, and another 'The Church, vocal on gun control, but silent on drones' won a Polly Bond Award of Merit in 2014.  He has a special interest in liturgy and drama and has devised a number of liturgies for special occasions. He has authored plays for Christmas, Epiphany, Good Friday and other occasions, aimed at performance in church by adults and children, and he has co-authored three Bible-based musicals. Two of his liturgical dramas -- A Passion Play for Good Friday and A Celebration of All Saints are published on-line by Morehead Church Publishing. Further details can be found here. 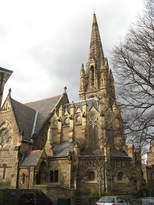 This Scottish Episcopal Church in the heart of Edinburgh's 'New Town' was once a parish church, before becoming the official chapel of a Christian Military Order. A tiny Episcopal congregation continued to worship there, and finally re-established it as a non-diocesan Episcopal chapel when the Order relinquished it. Under the ministry of Canon R A Grant the life and congregation of St Vincent's grew considerably, and was re-admitted to the Diocese of Edinburgh shortly before his retirement in 2014. Under the current Rector, Canon Allan Maclean, St Vincent's continues to flourish and grow as 'a village church in the heart of the city'. The interior of the building is notable for exceptional stained glass and carved crests. St Vincent's is unusual in continuing for the most part to use the old  Scottish Communion Liturgy of 1929. Since 2015 it has been an official venue for the Edinburgh Fringe Festival and the principal venue for the Edinburgh Festival of the Sacred Arts in the Fringe . For further information see St Vincent's website.